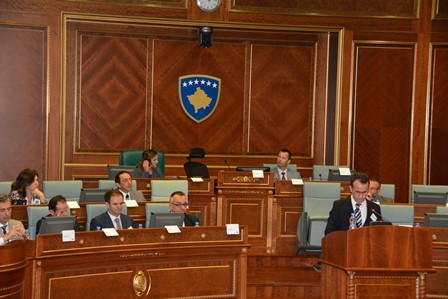 Prishtinë, 15 June 2015 – Today was the first day held of “Kosovo Summit for the International law and Human rights 2015”, organised by the Supreme Court of Kosovo and Institution for Cultural Diplomacy (ICD), with the support of UNDP and USAID in Kosovo as well.

Thanking all the participants, in the introductory speech, President Hasani talked about the rule of law, with special emphasize about recognition and respect of human rights. He considered as great honour and particular pleasure that Kosovo and Supreme Court are hosting this Summit for which he thanked the Institution for Cultural Democracy, headed by Mr. Mark Donfrid, who enabled realisation of this event. Also, thank was addressed to UNDP and USAID for their support. Kosovo Judicial Council Chair, Mr. Enver Peci, in his speech, welcomed the initiative for holding this Summit and among others cited: In this introductory speech I want to be focused and emphasize that the Judicial system in Rep. of Kosovo is passing through a continuous number of reforms, primarily is harmonising local legislation with principles and democratic values with regard to especially the organisation of judicial power and putting the same in the position it deserves to be, meaning as independent power as other two powers. In this direction I would like to mention that the applicable current legislation, starting from the highest legal act -the Constitution of the country- determines that the Judicial power is unique, independent, fairly apolitical, impartial, ensuring equal access of all in the courts and exercised by the courts as such. The Judicial power, as constitutional category, is fully independent in relation to other two powers. I would like that in this Summit to discuss important issues of international law, primarily to ensure the best practices in respect of human rights, which the main goal of each power, therefore, I consider that the judicial power is highly burdened in fulfilling its obligations that has in front of the citizens – ended Mr. Peci.

Meanwhile, introductory speeches with the topic of the Summit, were held by the Minister of Justice, Mr. Hajredin Kuçi, deputy representative resident of UNDP in Kosovo, Ms. Alessandra Roccasalvo, and then President of Supreme Court Mr. Enver Hasani, and on behalf of the Higher Court of Albania Mr. Miran Kopani.

In the first session of the Summit with the topic “Judges as guardians of human rights and rule of law” under the moderation of prof. dr. Blerim Reka and Ms. Tatjana Sehic, discussed the speakers: Mr. Joel Mermet, high expert for human rights, Ms. Valdete Daka, judge of Supreme Court of Kosovo, Mr. Fisnik Korenica, researcher of the Group for juridical and political studies and the expert of Constitutional law, PM Margarita Kadriu.

Highlighting the Advances and shortcomings in the field of human rights and rule of law, President of Supreme C. prof. dr. Hasani, highly appreciated discussions held by Higher State Officials, national and internationals, those held by experts and researchers, being convinced that the presented experiences, opinions on importance of social values – rule of law, democracies and respect of human rights , will serve not only to the best of advancing the new country, like Kosovo, but it will also give contribution to the positive and long-term development of international law.

The Summit will continue tomorrow its tasks where will be discussed the topic of “Human rights, challenges and possibilities in promoting the dialogue and peace among the communities”.